LibDems oppose secret ballot. (PR but not as we know it?)

Are we seeing the re -emergence of the 'rotten borough' in Cornwall?  Cornwall had the largest number until they were all abolished by the Reform Act 1832. There were about 13 including East Looe, West Looe, Callington and Saltash. (Callington: 42 voters for one member of parliament).
And with no right to a secret ballot until 1872, bully boy tactics could be used to get a preferred candidate elected.

Nothing new at Cornwall Council
Most Council decisions are taken by show of hands or named vote in the interests of transparency. But by convention election to positions of special responsibility are taken by secret ballot.  But the Lib Dem/Indie administration are so worried that their own supporters will not vote for the administration's preferred candidates that they have dispensed with that convention.

For example, on Tuesday the Lib Dems wanted to make sure their candidate, Mebyon Kernow councillor for Callington, Andrew Long, was elected as Chairman of East Planning Committee (extra Special Responsibility Allowance  £6,000 per annum).

Mebyon Kernow have only 4 out of 123 council members. Councillor Long only won the Chairmanship by one vote last year despite behind the scenes party whipping by the Lib Dems.

So this year the Lib Dem councillor Bob Austin asked that the vote for Chairman be taken by named vote to keep the Lib Dem members under control. 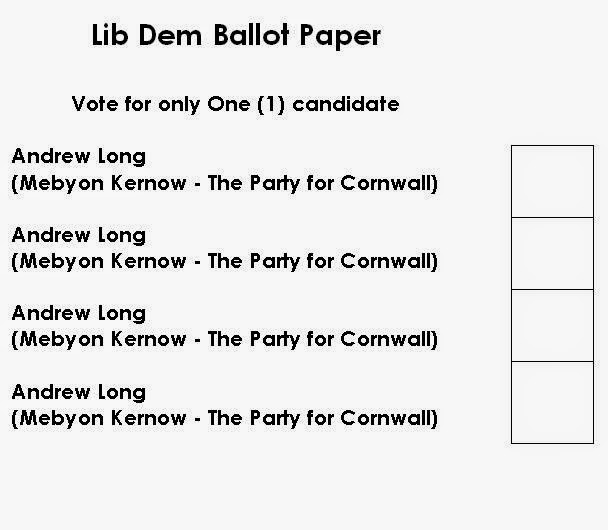 Just like the 19th century.  Bully boy tactics from the party which sees civil liberties as their issue.