The Parish Council in Mylor was stormy last night. There were roughly 100 people present. I stood in for Cllr Tony Martin to hear residents' views.

A team led by a representative of Savills (Bristol Office) arrived to explain how their client's planning application (PA16/10635) in a six acre field forming part of the Area of Outstanding Natural Beauty was just what Mylor needed.

There was a shortage of affordable housing within the Parish, which Savills said amounted to 91 units. The Chairman of the Parish Council said it was in fact 69 units. In either case it is a significant number.

The Chairman said that the Parish are working on a plan which includes work on where homes for local need may be sited.

Residents had many concerns about the current application:

1. The noise and disruption of construction traffic.

3. The unsuitability of the surrounding roads, particularly with residents having to reverse out onto Saltbox Road: the Savills team offered a new bit of pavement here in mitigation.

4. Mylor School is full to capacity (147 pupils with a capacity of 140). Savills acknowledged there was more to do to resolve this issue.

5. There would be a loss of Grade 2 agricultural land.

6. On flooding, we were advised that this area is 'only' Flood Zone 1 but Savills acknowledge that there is more to do to sort out foul and surface drainage. They plan attenuation ponds on the higher ground to soak up surface water.

The crux of it is that, even if other objections can be overcome, there can be no justification for a loss of ANOB land unless there is a real overriding need to provide affordable homes for people with local connections here. Savills were very very vague on that. Their client (not present as 'had suffered a puncture en route') asks for permission for 'up to 32' homes of which 'up to 50 per cent' would be affordable (70% social rented and 30% shared ownership).

The crucial phrase is 'up to'. So far as I can tell the applicant intends to sell on the land if permission is granted. They have done no work on how many affordable homes are viable. They have no partner in place to deliver the affordable homes. A cynic might say that there has been almost no work done on this at all. It looks like a peg to hang a permission on.

The very fact that Mylor has a need for local needs homes means that vague promises which will scar the AONB and could in the end providing almost no local need homes should be given short shrift.
There seemed every possibility that if permission were granted a future owner would be back looking to increase the density of housing on the site. At the moment about 50% is open space. This application looks like classic foot in the door stuff.

Posted by Fiona Ferguson at 13:04 No comments:

Number of Councillors for 2021

Submission to the Local Government Boundary Commission for England 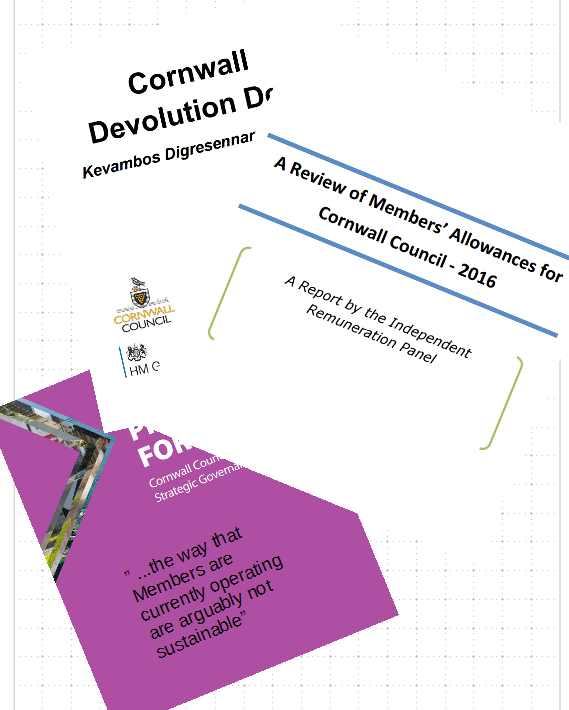 Posted by Fiona Ferguson at 08:29 No comments: