Planning permission was turned down a few months ago for the open area of land beween 40 and 42 Carrine Road after I intervened.  No further application has been made so far.
However, last week part of this land was fenced off.  I am afraid that my guess is that the owner is gearing up to make another application and is trying to make the land look more like a development site.
I have alerted Cornwall Council but as the fence is not much more than 1 metre high approx there may be little we can do about it.
I have asked Truro City Council to put in a bid to make the land a community asset.  I am afraid that only means they would get the option to buy it if it is put up for sale but it would allow public debate about this open space.
Carrick District Council had the opportunity to adopt it as open space some years ago but chose not to.
I will do what I can to preserve it.
Posted by Fiona Ferguson at 14:13 No comments:

Air in Truro can be as bad as Central London 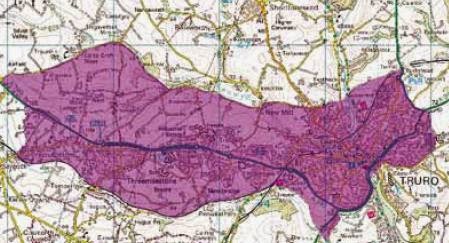 This week a public consultation has started about making Truro an Air Quality Management Area.
Basically, the Council are consulting on what precise area should be covered and what measures should be taken to improve air quality.
Levels of Nitrogen Dioxide, which should not be more than 40 micrograms per cubic metre can be as high as 96 in Highertown.
Poor air quality can aggravate lung and heart disease and asthma.
The recent dramatic rises are attributed largely to increased use of diesel cars.
I have asked the Council for electric buses for the Park and Ride but so far I have had no response.
Highertown, particularly the narrow canyon part of the road rising to Penn An Dre (the development on the Old Richard Lander School site) is worst affected.
But there is also a problem in Kenwyn Rd where it narrows near the City Inn.
At the moment the A390 accommodates  27,100 vehicle movements per day.
With 2,200 new houses proposed for this area, this could increase, the Council estimate, by 6500 per day. I would guess that it could be more but even an increase of 6,500 would have a very adverse effect.
The Council think the Eastern Park and Ride may help but admit that the Western Park and Ride has not reduced traffic. Mostly, it is just a massive cheap car park for RCHT,  Truro College and Threemilestone Industrial Estate.
Comments please by 13th April to: Truro Air Quality email or by phone 0300 1234 213.
There will also be a drop in session at Truro Leisure Centre on 18th March 5 - 8pm.


Posted by Fiona Ferguson at 19:42 No comments:

I requested that this matter was the subject of an independent review.

Mrs Lowton, who, I understand is a solicitor and expert on child care law, undertook the review. Her report, published today, has identified a number of areas in which mistakes have been made by the Council in 2005, 2010, 2013 and 2014.

She has also made recommendations on where the Council's procedures for dealing with safeguarding issues should be improved.

Reviewing the conclusion of the LADO (Council's safeguarding) process was outside Mrs Lowton' s terms of reference and she has not therefore reviewed the evidence that the LADO considered.

However, she has said that 'the LADO process was swift and decisions were made which were reasonable in all the circumstances'. In her view the evidence gathering was comprehensive, independent legal advice was sought, the membership of the LADO committee was reasonable and their decision was unanimous.

She explicitly rejects the argument that the LADO committee was a 'kangaroo court'.

She believes that the Metropolitan Police Service, in initially not allowing the Council to share evidence with Cllr Folkes, failed in their duties to cooperate with child protection investigations.

She says the Council could not ignore evidence in its possession.To do nothing was not an option: Its duty was to prioritise children's welfare.

There also remains outstanding the Chief Executive's complaint about Cllr Folkes under the Code of Members' Conduct, which may in due course be considered by the Council's Standards Committee.

One key issue for the Council will be to consider reintroducing a safeguarding (DBS/CRB) check for all members. This policy was introduced in 2009 and for some reason was not applied after the local elections in 2013. Therefore, if Cllr Folkes had first been elected in 2013 he would not have been checked at all.

Overall, Mrs Lowton says that the Council, in its recent actions, were right to make the protection of children their key priority.
Posted by Fiona Ferguson at 17:29 No comments:

Many of those in the in current Cabinet were elected on a promise they would 'cut the waste and not the services that people rely on'.

So presumably in 2013 they predicted no significant cuts in government funding? Now
apparently they can confidently predict the future right out to 2019 and tell us savings are needed of £196m.

Most of these 'savings' are not cuts in funding as such but simply mean that the Council takes the view that its budget should naturally rise in line with inflation even if no one else's does.
This administration, more than anyone, owes it to Cornwall to go the extra mile to minimise cuts in public services.

When a Band D householder has to find around £1500 per year for their council tax, it is not good enough for members of this Council, not all of whom pay their council tax, to argue that the rise is only the price of a bar of chocolate a week or whatever.

It is also notable that we are seeing astronomical rises in parish precepts (commonly 30% this year, even in one case, 300%, as parish and town councils struggle to take on the services that this Council has ditched).

In those circumstances, I have to question whether this Administration is as efficient as it could be.

Times may be tough but this Council is still recruiting this week for three posts at up to £78000 per year. These posts are three layers of management below the Chief Executive.

Despite the advice of the Chief Executive and other senior officers, who have said that the existing structure of 10 advisory committees is unsustainable as services and officer posts are reduced, this Council has failed to make its own democratic structures more efficient.

Oh yes, I know that public protest has resulted in the reduction of meetings held behind closed doors, but it is sheer complacency if this Council thinks that is really the best it can do.

If we are not more efficient some may question whether members of this Council have cut services but at the same time have acted to protect their own vested interests.

Can we really justify the number of committees we have, with each chairman paid £6000 for chairing, perhaps 8 meetings a year, while at the same time cutting half the library budget, all the youth services budget, all the leisure budget, even carrying out a risk assessment to decide whether those manning certain school crossing patrols may be cut, without putting children's safety at risk. The list goes on and on....

I accept that a delay in this Budget would mean more cuts. So I cannot stand in its way but, in all reasonableness, I cannot be expected to support it.
Posted by Fiona Ferguson at 11:49 No comments: