We know about the £60,000 'bus lane' but what about £600,000 recently found 'left over' by the Council, which communities are now being invited to bid for new projects?

Management time at the Council will be found, in addition, to administer the bidding process for new money.

Lovely to have new money for new projects. But how can the Council explain it in a year in which it intends to dump the libraries on the parish councils, walk away from its leisure centres (apart from Penzance, where it cannot, as it is funded by PFI) and cut to nil its budget for public toilets?

The most annoying aspect is that the applications for money that members were invited to make (by February 2014) for their priorities for highway  problems in their divisions have all been rejected.

Is this the Council's version of localism in action; reject what local people want and ask them to bid for money for something completely different?

Why so slow: the Stadiums and other applications to the west of Truro

When the large applications for the west side of Truro were granted last year, the Head of Planning was given three months to negotiate the 'planning gain' (Section 106) agreements. There has been an understandable delay due to the need to refer the applications to the Secretary of State.

But in all cases that process ended 3 months or more ago. Under pressure from another developer (miffed having submitted the only retail application turned down for the corridor) , officers took the applications back to the Strategic Planning Committee to get an extension of time.

They blamed the Government, as Cornwall Council are wont to do. But the new rules complained off, by the Council's own admission, came in last April, so not that new.

The Council also said that the Section 106 agreements were now concluded but, bizarrely, they asked for an indefinite extension of time to complete the agreements. And for future occasions they said they would draft reports for the Committee so that they could take as long as they wanted and not come back to Committee.The Committee granted them a 6 month extension.

So, in summary, the Council claimed that 3 months was adequate but when it came to it, needed at least an extra 6 months.

But the Chairman did not allow me to speak. I have been asked what can anyone do.  I can only suggest that you get in touch with Cllr Nolan, the Chairman of the Committee or take the Council's decision to judicial review.


Try the Cornwall Council planning application comment link. Search for "Langarth". On the right hand side you can enlarge a map of the area until you see the areas surrounded by red (lots of it!). Filter on 5 years and zoom in to a specific area. Double click and it should bring a pop-up of all the relevant applications in the last 5 years. 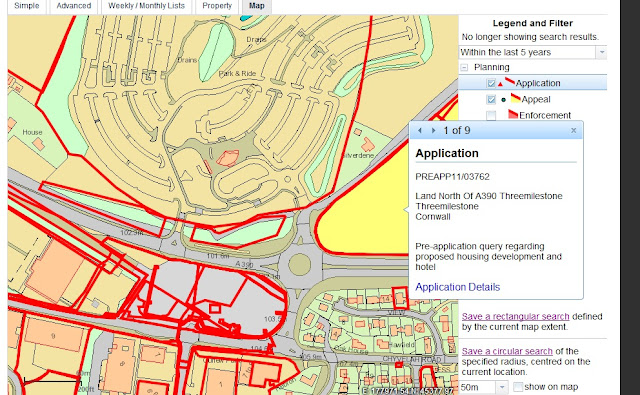