In June 2016 the Mayor of Bristol (Labour controlled) said;

"Bristol has a tremendous wealth of talent and creativity that deserves to be showcased to the world.

"I want culture – and sport – to be accessible to everyone, not just those who can afford it. I want culture to reach out and overcome Bristol's social and economic divides.

"With this in mind, I am proud to announce my ambition to lead a bid for Bristol to become the European Capital of Culture [2023]."

Mayor Rees said: "We can't afford [Capital of Culture] now, because there's no guarantee we'd get it.

"They [EU officials] invited us to bid, but when you look at the cost of doing so compared to the fact that we're not really in [the EU] and there's no guarantee we'd win it, our judgement is – at a time when we're facing horrific budget decisions – it wouldn't be a wise way to spend the money."

He said: "The bid for Capital of Culture is impacted by Brexit and spending that much money for a bid, with a risk of achieving nothing, is not a good decision.

"We are instead concentrating our efforts on working with the city's cultural providers to enhance Bristol's cultural offer."

Source; http://www.bristolpost.co.uk/bristol-european-capital-of-culture-bid-ditched-as-affect-of-brexit-and-horrific-budget-cuts-bite/story-30159287-detail/story.html
Posted by Fiona Ferguson at 15:48 No comments: 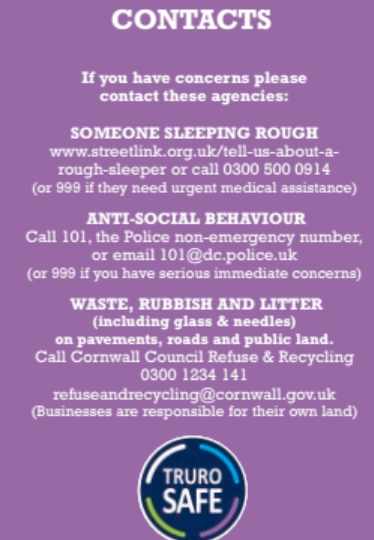 Posted by Fiona Ferguson at 18:21 No comments:

I was really disappointed that the Council voted to reject all the amendments put forward by the Conservative Group to the Annual Budget particularly our well-reasoned argument not to waste £536,000 on an opening gamble for the European Capital of Culture 2023.  That opening commitment could then lead to spending another £25 million if successful.

The best evidence is that Cornwall can not win even if the competition continues.

The government has already issued a warning that it will not be held responsible for any money lost as a result of entering the competition. We don't even need to read between the lines to understand what they are saying!

Although I campaigned for Remain, I do not think we need the European Union to tell us we are are a Capital of Culture.  Further, it appears that the Council has not read the rules of the competition and we will almost certainly not be eligible post Brexit.

So, a waste of £536,000 of our money. We said put it into pedestrian crossings and other schemes which will show a real-world benefit.

Cllr Biscoe backed the EU bid and said there was always money for highways. This is extraordinary and it is not what was said at a public meeting on Kenwyn Hill recently.

I am pleased that money has been obtained from the Conservative government for big schemes like the A30 and also extra money for potholes, such as £2.9m received last October.  The Council reannounced the £2.9m last week.  Cllr Biscoe claimed it had been found from Reserves.  Not so!

The Conservative Group also put forward that this sum be increased by a further £9m. This had been allocated to economic development but not spent.   There was still £23m left in that 'pot' anyway.

It is time the Council subjected economic development schemes to a lot more scrutiny. Not all are bad but even the general infrastructure schemes must show genuine value for money.  And just how much should the Council plough into speculative geothermal schemes or the Aerohub at Newquay?

I find that people are sceptical as to whether  Councillors know what they are doing spending money on economic development.  Who could blame them?

Posted by Fiona Ferguson at 12:21 No comments:

This is the disclaimer that was issued by the UK Government to any authority or organization considering spending money on a bid to be the European Capital of Culture in 2023. 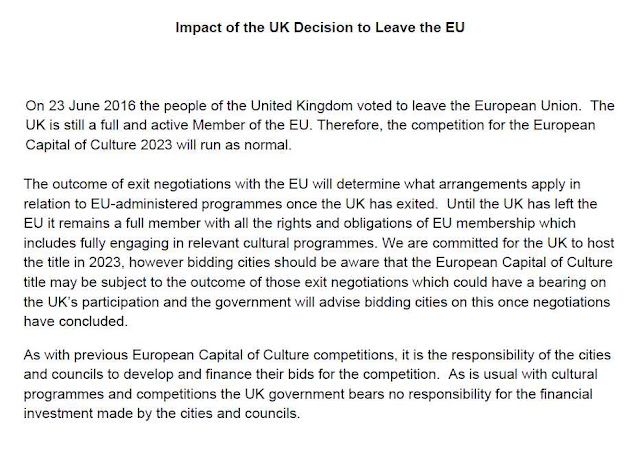 Posted by Fiona Ferguson at 13:11 No comments:

Layout and design features for the proposed Newbridge Playing Field and the Public Consultation Report can be seen by following the links below. 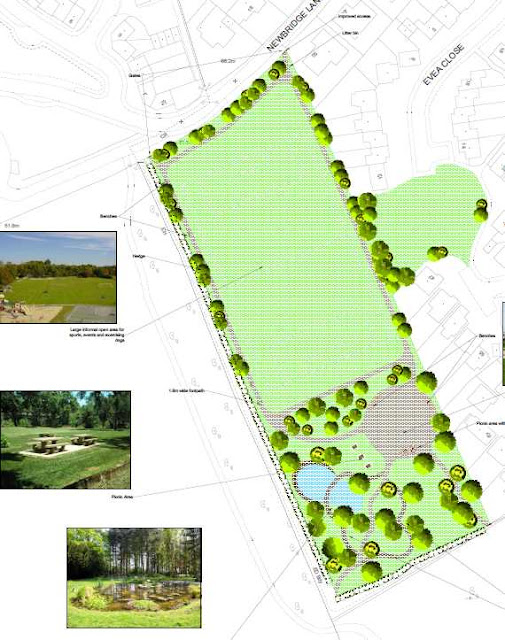  Surveys were carried out in early 2016 targeting residents, businesses and visitors in seven towns. Nearly 7,000 responses were received. Over a third of residents and two thirds of businesses surveyed identified parking issues on streets in their locality. Top reasons given for parking problems included: Lack of street space to accommodate all household vehicles; commuters, visitors and shoppers parking in residential streets; double yellow lines affecting parking and loading near businesses; and parking near schools, college, university or hospital. Respondents had a mixture of views about introducing residents parking zones and other parking measures.
Latest update
 We carried out a further extensive public engagement in the autumn including letters to over 24,000 households, publicity in town centres, via social media (reaching over 50,000 people), press releases and public events in each of the seven towns.
 Over a third of residents who were contacted responded with their views on proposals for new residents parking zones (nearly 8,200 responses).
 Over half of the residents who responded had problems parking on the street near their home, with some areas having over 90% of respondents saying it was an issue.
 Views on proposals for residents parking schemes were varied, with no consensus across the towns about how to address the parking issues
 We recognise that parking on street is a serious issue for some residents but further work is needed to work out appropriate solutions for those areas and deal with displacement parking.
 1700 responses (including over 200 from businesses) were received about on-street pay and display proposals alongside 3 petitions with 2091 signatures
 90% of respondents oppose the on-street Pay and display proposals
 Due to the level of response we received, the detailed analysis is still underway and isn’t due to be completed until later this month.
Next Steps
 The data and emerging proposals are due to be shared with local Members in February/March (invitations have been sent out – dates below).
 Following these sessions, proposed schemes will be drawn up and presented in a business case for decision by Cabinet later this year.
 The individual schemes which require Traffic Regulation Orders will be subject to a formal consultation as part of the legal procedure necessary to obtain the Order.

The Council expected protests (presumably from Remainers) today and were all geared up for a surge. In fact only a few officers and the press attended.

If you would like to watch the whole of the proceedings click HERE but below are some of the highlights of the evidence they were given by the Council and other stakeholders like the National Union of Farmers:

1. The Council leadership is looking to Wales for advice.
2. Brexit Opportunity:getting Government money without EU constraints on its use but who knows how   much money.
3. Cornwall is worried that Dept of Local Government has introduced a 'value for money' test and is asking the Council to underwrite schemes for which the Govt provides cash.
4.Cornwall will not benefit from £350m of EU funds in 2020 to 2027 but see 2 and 3 above.
5 . Fishing : 92% of catch is exported. So very important to get a tariff free deal.
6. Brexit opportunity : Staycations have increased due to fall in value of sterling.
7.Council worried about uneven standard of hotel accommodation in Cornwall.  Some German tourists stay in Torbay and make forays into Cornwall.  Constraint on tourism.
8.Brexit opportunity : have a bespoke farming subsidy scheme.
9.Council considering a regional immigration deal for Cornwall  (as are London and Scotland) to avoid labour shortages in farming, food processing, IT, research (and also to encourage foreign students).
10. World Trade tariff rules no good for Cornwall which has 6% GVA in agriculture and food processing. (eg 40% on UK lamb exports).
11. Brexit has had a negative effect on investment in Cornwall.
12. Brexit opportunity : integrate rules to promote agriculture with rules to protect the environment.
13. Brexit opportunity : make rules less complex but there may be unintended consequences and we will still be affected by EU rules and ideally want to influence them.
14. New markets are there but say, out of £300m per annum sheep exports, £280m currently goes to EU. Hard to replace.
15. Worries about future name protection of Cornish pasty and clotted cream etc.
16. Worries agriculture may be sidelined in bespoke trade deals as tiny part of total export values (2% with fishing /forestry?)
17. Worries no level playing field for agriculture as some other markets have different standards eg US market is less stringent about antibiotics use and growth  hormones.
18.  Some evidence of software companies considering relocating to EU but sounded very anecdotal.
19. The  Cornwall Isles of Scilly Futures Group has written a paper  'Catalyst for Change' and is determined to make the most of the Brexit opportunities.


Posted by Fiona Ferguson at 23:10 No comments:

At the recent public meeting  the 'No money' Council promised an 'options appraisal' in April to assess how this junction can be made safer.

In the meantime I have asked for the school crossing patrol to be offered with longer hours to make it a more viable job and cover after school/breakfast clubs.

Another short term measure would be to ask Truro City Parks dept staff to cover this position. I have asked for this to be considered. 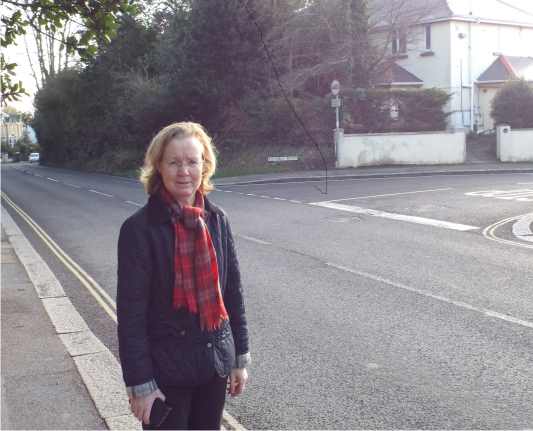 Posted by Fiona Ferguson at 12:27 No comments: