A tale of two stadiums

Today there was an eight hour discussion at the Strategic Planning Committee mainly on enabling applications for the Stadium for Cornwall and a new stadium for Truro City Football Club.

Really disappointing that the Committee felt it had to put the cost of two stadiums onto Truro City Centre. The Government offered to help. Why let the Government off the hook and take the adverse retail impact on Truro instead by approving two out of town retail parks to compete with the City Centre?

It looks like a failure of leadership. Was this not just the right moment to stand up for Cornwall?

Perhaps the Council will reduce town centre parking charges if things get really tough. But I would not hold your breath. Its next plan is to charge for on street parking in town centres too.

Tomorrow, a meeting on the Council's proposed surf tax.
Posted by Fiona Ferguson at 22:17 No comments:

I have received a copy of a note from the Portfolio Holder together with a briefing on LOBOs.

There are two errors:
1. The best way to minimise your borrowing costs is to borrow only what you need for the period you need it and, if it is important to have certainty, fix the rate.
It is a mistake for the Council to enter into a cocktail of complex financial  instruments which the Council thinks will minimise its risks but in fact carry different risks which the Council is not well placed to evaluate.
The way of calculating the price to exit an 'inverse floater' is an example.
Banks would not ordinarily run the risks that the Council is running on these deals. They swap out their risk.
2. The Council has a good credit rating. It is better than the banks it is borrowing from. So the banks should ordinarily have to pay higher rates of interest than the Council.
This should put us on red alert to start with that the deals might be too good to be true. It also means that we should be aware that the terms of these deals would look jaw droppingly attractive  to the banks.
If the banks lent to central Government, they would get peanuts in comparison. Can anyone imagine the Government offering  National Savings Bonds where the rate is fixed except that if rates go up the investor can raise the rate and the Government has to redeem  the bond early if it does not like the new rate ?

Comparing fixed PWLB loans with LOBOs is like comparing apples and oranges. On the PWLB loans the rate is fixed.  So the Council takes a view that it is comfortable to pay the fixed rate on a PWLB loan for the designated period - like a fixed rate mortgage.

The LOBOs are not fixed as the lender can ratchet up the rate on the option dates.

If the Council has to carry liquidity (which pays derisory interest rates - on average, 1.17%) to hedge against suddenly needing to repay the LOBOs then that is another cost that the LOBOs are causing the Council.

I did not raise this issue until 1 December last year because the Council does not disclose in any of its documents details of these deals. Other Councils do.

Posted by Fiona Ferguson at 08:51 No comments:

Those who have been following the story highlighted by the Channel 4 Dispatches programme will realise that Cornwall Council have been dealing in complex loans through which £millions of Cornwall's money could be lost.

Some questions that need answered :
1. What is the cost to the Council of these deals which can even involve compensating banks for the cost of complex derivatives such as Bermudan swaptions?
2. Why was the Council taking bets on interest rates?
3. Why has the Council failed to be transparent about these deals? Other Councils are.
4. Why does the Council not appear to comply with CIPFA guidance on LOBOs?

I am calling for an independent enquiry on what risks Cornwall Council has been taking on complex LOBO (Lender Option Borrower Option) loans.

Clive Betts MP the chairman of the Local Government Parliamentary Select Committee has been particularly outspoken and said, "I think the FCA [Financial Conduct Authority] now ought to investigate this, and if it hasn't got the powers then the government ought to consider giving it the powers to regulate this in the future."

Mr Betts may well get things under way first. If he does then I expect Cornwall Council to play a prominent and transparent role.


Posted by Fiona Ferguson at 16:44 No comments:

Many of you will have just seen the Channel 4 Dispatches programme which has highlighted the problems with Cornwall Council entering into complex loan arrangements and not understanding the consequences.

On the 17th February 2015 I asked Cornwall Council about the huge amounts of money that had been borrowed, the extraordinary length of time over which the agreements had been made and why I thought there was significant risk to the Cornish taxpayer.

Listen for yourself to what I said at that meeting and judge if I gave Cornwall Council a fair warning that they were taking enormous risks with taxpayers' money.

It takes about 6 minutes.   Thanks


Posted by Fiona Ferguson at 20:36 No comments:

Council to have more borrowing powers?

Part of Cornwall Council's "Case" to Government for more powers is to ask for more borrowing powers (current total Council debt around £800m). But would this be safe?

It appears that the Council (almost exclusively the old County Council) has taken out bank loans totalling £400m, which are repayable in 40 to 60 years.

In the early years the Council claims that it was making a profit by borrowing cheaply and investing at a profit. The Icelandic bank debacle showed that this was not a risk free strategy for the Cornish taxpayer.

But there was a more fundamental problem: the Council was borrowing long but investing short term. So the market could catch it out, as indeed it did when the recession hit in 2008 and interest rates dropped like a stone: It was a massive bet on interest rates.

I also recently discovered that the Council's £400m bet on interest rates was actually a one way bet. It appears that the banks have the option to raise the interest rate periodically throughout the 40 or 60 year period. The Council's "option" at that point is to repay the loan early.  So the loans are called LOBOs ( lender option/ borrower option).  It sounds balanced but, of course, the borrower option is no option at all.  All the Council can do is refinance its loan at the new (higher) market rates with a different lender or lose the use of the money.

The banks lay off their (limited) interest rate risk by entering into complex financial products such as Bermuda swaptions.  The cost of these exotic instruments is effectively passed on to the Council.  The Council just hopes for the best.

When challenged,  the Council says it is comfortable with its borrowing strategy. It is utterly impossible to understand why.

More borrowing powers for Cornwall Council?  I think not. My fear is that the Council are entering into transactions to make tiny savings but the risks of these transactions are huge.  If you do not understand it, best not to do it.

The Council weren't keen to explain what it had been getting into either. 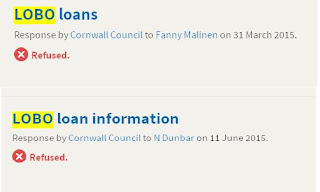 Posted by Fiona Ferguson at 13:28 No comments:

Having  a bespoke flood authority for Cornwall, a body which deals with Cornish heritage (not English Heritage) and so on sounds absolutely great.

But, bespoke generally costs more.  We all know that money is tight. It seems unlikely that the Government will want to provide us with additional funds to create bespoke services.

We may get more money to deal with flooding, an issue that was highlighted in the Conservative Manifesto but do we want to spend it on what, at least in some respects, would be a rebranding exercise?

The Council now seems to have woken up to this and is asking for additional monies to run these new Kernow services.  But going forward the Council would take on new risks from these new responsibilities. I am not convinced that the Council has established a good enough reason to do this.

It is a bit ironic that the Council's ask on Heritage involved them taking over the Cornwall and West Devon World Heritage Site. So no worries there then on  Devonwall.
Posted by Fiona Ferguson at 00:21 No comments: