Last night was the first of four public meetings for the Council to try to get a mandate for its campaign for more powers.

There were about 20 people present excluding Cornwall Council members and officers. Almost all were already known to the Leader of the Council for their campaigns on other issues.

I think most were in favour but they fairly asked if the cost to Cornwall had been assessed and the availability of the necessary expertise.

I cannot say what they felt about the Council's campaign to make it easier to raise council tax. The Leader took no vote on this! I think there has only been one case of the public voting for more tax and that was in Milton Keynes in 1999.

I have to question whether another 3 similar meetings will give the Council the mandate it seeks. People that take the trouble to turn up to a meeting to discuss devolution tend to be in favour.

The Council's approach to the challenge they want to take on is ambitious but also naive. I hope the Government will not drop a lot of new powers on them too quickly. "Too much, too soon" can cause as many problems as "too little, too late".

The proposals last night were presented by the Chief Executive. If all goes to plan in Edinburgh today he will be leaving at the end of July and Cornwall will be managing without a CEO for a bit.

Posted by Fiona Ferguson at 07:50 No comments:

To ensure clarity around what this application provides in terms of a Stadium and replacement open space and the timetable for those, I would be grateful if you would immediately publish the relevant documentation ie Section 106 agreement, any bond, trust or other document that is part of the contractual matrix that is designed to ensure that this project will happen.

This is especially important as the availability of Government money now means that there is not only one option open to Cornwall. This particular project, which has the benefit of being further ahead than any other, has disadvantages for Truro eg the grant of a planning application in a place otherwise considered inappropriate, causing adverse impact on the City Centre and the relinquishment of 11 acres of public playing fields. It is also highly complex.

This will enable there to be satisfaction that the scheme will happen and that can be weighed in the balance by the Planning Committee on 16th June against adverse impacts. It should avoid last minute arguments on the ˜legals˜ as occurred in March. So, I hope you will welcome it.

Swimmers getting away from the Council tax-man?

As my colleague Cllr Fitter said, when you are in a hole, best to stop digging.

What is wrong with the Council's proposed tax:

1. It sends the wrong message to surf schools, the second blue light service on the beach.

2. It will encourage more hire of surf boards without a beach presence, so less safe.

3. It is another anti-tourism measure, like closing public toilets.

5. The license scheme will give the false impression that the Council can monitor the qualifications of surf instructors.

6. We are,in the end, talking about income of £40,000 and it will probably cost more to collect than it raises.

7. The tax could be the subject of a legal challenge.

8. The damage to reputation of the Council will be huge and unnecessary.

Cllr Fitter, like Cllrs Pearce and Parsons, proposed a fixed fee licence of £500 (which would allow surf instructors to use all our beaches) as a compromise. The Independent/LibDem administration refused to listen and ploughed on with their own unworkable proposals.

But, in a last ditch attempt to avoid losing face (and the tax!) the Leader promised to refer it back for further discussion. What a shambles!

Further discussion will be at the Housing and Environment Portfolio Advisory Committee on 31st July. But then any proposed fees would need to come back to Full Council on 15th September for approval. So no fees will be available for this year so far as I can see.

Posted by Fiona Ferguson at 12:35 No comments:

A short guide to some of the difficult issues in the 'Case for Cornwall':

The Council seek more power to raise Council tax without any public referendum imposed by central government. The referendum cap has led the Council to 'manage on' 2% rises or less for the last 5 years. In 2002-2009 rises ranged between 5 and nearly 10 per cent per year.

Council is looking for a single public sector budget for Cornwall. Will this expose Cornwall to risk that we cannot fund? Do we want the protection of a National Health Service or to fend for ourselves. The health budget in Cornwall dwarfs the Council's budget.

The Council propose the possibility of planning permission for conversion of houses to second homes. This would create a two tier property market in Cornwall.

If the Council controls the electricity grid (as proposed) there is likely to be more large scale wind and solar as the Council benefits from their business rates.

More power is sought for compulsory purchase powers for the Council to acquire land 'at no development land value' to build more housing.

A number of quangos are proposed to preside over all of this. Who will really be in charge?

Will the Council get more money for the extra administrative costs of dealing with more powers?

Are we satisfied that the Council is up to the job of taking on these extra powers within its existing resources?

Cornwall
Posted by Fiona Ferguson at 14:48 No comments: 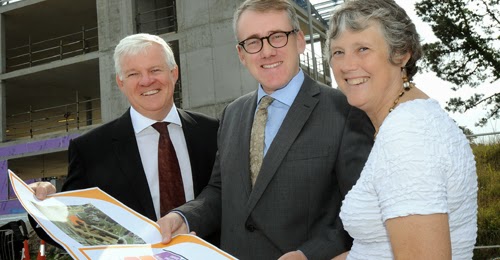 On 16th September 2014, just before his shock resignation, Cllr Folkes, Cabinet Member for Finance and Resources, announced, with great fanfare, 100 BT jobs for the Council's new offices in Bodmin.

Since the general election he and his (now former) Cabinet colleagues have said the jobs are not there and they were dubious for a considerable time as to whether this deal would succeed.

BT have gone from hero to zero in 8 months.

I have to ask:
1. Were the Cabinet being straight with the public last September?
2. If so, did they ever have the management of the BT contract under control?
3. If things are so bad and the IT upgrade is complete (this is a job that the Council said it could not do itself) why do they not consider termination of the BT contract? If they are going to wipe the floor with BT, how easy will it be to continue to work with them?
4. If they did terminate the contract, would the Council try and do a joint deal with the health bodies in Cornwall to deal with all their IT. That was the original idea which the Council was unable to achieve. Do our health colleagues regard the Council as so unstable as to be an unsuitable partner?

I do not suppose Health would admit this but the reality is that the future is bleak if the Council cannot even work with them on basic IT provision.

Not the best story on the day the Council announce that their Case for more powers goes out to public consultation?
Posted by Fiona Ferguson at 08:04 No comments:

Outsourcing: Is Cornwall Council up to it?

The performance issues with Cornwall Council's IT contract with BT are very disappointing indeed. However, it is not all bad news.

The Council calculated that its alternative to outsourcing its IT upgrade would have been bring in consultants and pay (£8m) to get them to do the upgrade: the Council simply did not have the capacity to do the job itself.

So where the work has not gone to plan the Council has had BT to blame and it has been able to charge BT penalties for poor performance. Imagine the scene if people in Cornwall could charge penalties to the Council for its failure to deliver services?

The creation of extra jobs from the BT contract was always a pretty wooly obligation. So I was surprised that the Council were prepared to build their £15m office in Bodmin on the back of it.

The experience of the Council in executing and managing the BT contract has led me to be cautious about a new plan the Council has to make money by taking on road maintenance for Nottinghamshire.

Last week the advisory committee recommended that Cabinet approve this proposal. It will go to Cabinet on 12th May. The deal goes to Nottingham County Council for approval on 20th May.

It is great for Cormac to be ambitious to make money elsewhere for Cornwall. However, I fear that the costs and risks for Cornwall are being woefully underestimated. And the timetable is incredibly tight.

For Nottinghamshire, however, they will be able to blame (and penalise) Cornwall Council if their potholes are too big!
Posted by Fiona Ferguson at 13:31 No comments:

Council are spending £400,000 on works to create a new car park for staff at Bodmin.

These are not the only costs. Details of some costs have been suppressed on grounds of commercial confidentiality. This is odd as the land for the car park is being acquired from the Homes and Communities Agency and not from a commercial organisation.

No news yet on any funding for any of the 400 schemes which members have requested for yellow lines, speed restrictions and residents' parking schemes!
Posted by Fiona Ferguson at 09:17 No comments: