Portfolio holder resigns; but that is a secret?

The quest for openness goes on.   Members of Cornwall Council were told two weeks ago by the leader that the resignation of a portfolio holder is "Confidential". 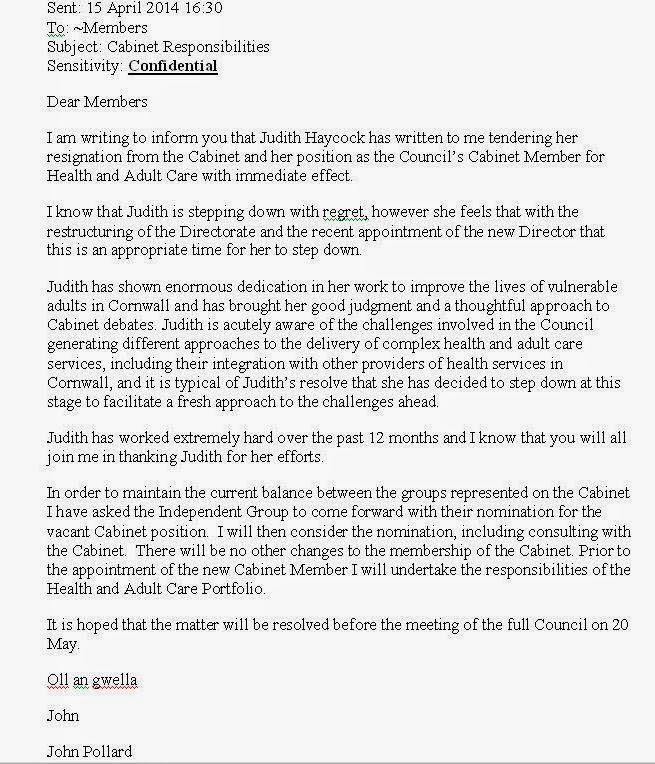 Posted by Fiona Ferguson at 12:41 No comments:


“Following these investigations Councillor Wilkins has tendered his resignation which has been accepted.


“We would like to thank Mr Wilkins for his hard work as our county councillor working on behalf of the residents of Illogan and also for his dedication in supporting individuals and various organisations dealing with learning disabilities throughout the county. “


I add my thanks to Cllr Wilkins for his work particularly in support of those with learning disabilities  in .


The Conservative group have pressed Cornwall Council for greater openness and transparency in its dealings and this must apply to the elected members as well.


As leader of the group I will continue my efforts to ensure that the public whom Cornwall Council serves know what we stand for and what we are doing in their name.

Posted by Fiona Ferguson at 15:43 No comments:

The so called 'tax' on spare bedrooms has proved one of the most controversial of the Government 's welfare reforms.

But we should not attempt to reject out of hand any measures which will help address the problems of people living in overcrowded accommodation (3580 households in Cornwall).

Clearly, difficult issues may arise where properties have been substantially adapted for the needs of disabled residents or there is no available accommodation nearby to downsize.  However, these issues are better managed in Cornwall rather than by a request for blanket exemptions from Westminster.

The whole initiative has been hijacked by party politics. The Labour Party have campaigned against it although they never reversed the similar tax that applies to private rented property.

Bizarrely though, Cornwall Council did not apply for extra Government money to help deal with hard cases. 86 councils did and 85 of those received extra help.

Posted by Fiona Ferguson at 19:50 No comments:

Transparency at the Council?

The motion I put forward on Tuesday to the Full Council that there should be more transparency and less closed door meetings was unanimously supported.  It was an opportunity for members to discuss some of the issues and to reaffirm the council's aim to be accessible and open.  I was grateful that the chairman gave us the time to do that.

A particular issue that has bothered members for some time has been the number of Portfolio Advisory Committee meetings which are held in private session.  Cllr Derek Holley  (Independent , Saltash East) must take a large part of the credit for raising this issue and taking a principled stand.

It was ironic that having made all the right noises the council (minus the Conservative group and a mix of other councillors) then voted to go into closed session.  Anyone following on the web site would have been confused because the item itself was obviously so secret that even the number was deleted from the agenda.   But just to confirm there really was an item 15 otherwise why exclude the press and public? 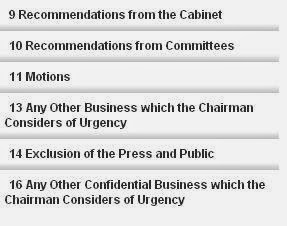 Item 15 was about a collective agreement with the Trades Unions concerning the Living Wage and Contribution Related Performance payments ( CRP; a kind of bonus scheme already in use in Cormac) but why couldn't we at least have told the public that was what we were doing?   Is the CRP scheme a good thing or not?  Why couldn't we discuss in public the issue of the overall wages bill for the council over the next few years?

Is it a principled stand for the Council to bring in the 'Living Wage' . Or is it easy to be principled when it is the people of Cornwall who will pay in council tax and reduced services. Can and should the Council pay those who supply services to the Council to enable them to pay the Living Wage too?

What would have been so wrong with discussing the principles so that the public could see the way their elected representatives think and are likely to act - how else can we be held accountable?

After all the brave words and solemn commitments the majority of members of Cornwall Council failed within the same meeting to live up to the promises they had just made.

The chairman did at least have the good grace to say it was "embarrassing".

Posted by Fiona Ferguson at 08:33 No comments:

I wonder if this sort of communication from the Portfolio holder for Communications, Alex Folkes, meets the high standards that the CEO sets for the public in dealing with council officers or are council members expected to put up with this from a senior councillor?

Cllr. Folkes is quick to criticise but he certainly does not like to be held to account on his own deals, even where he acts against the professional advice of the Chief Financial Officer. 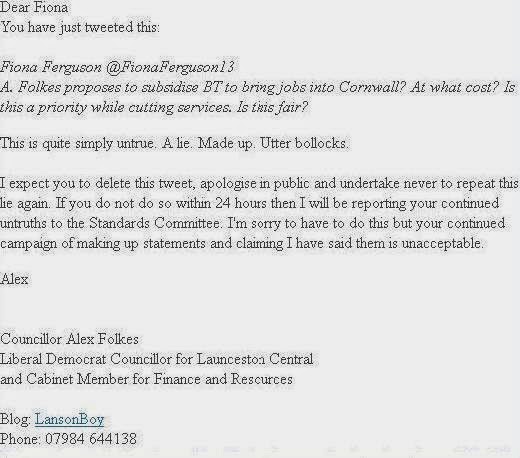 I have retracted nothing and I have heard nothing from the Standards Committee either.  I am entirely happy to defend what I have said but the standard of  behaviour and language falls, I believe, very short of that expected of a cabinet member.

Posted by Fiona Ferguson at 09:52 No comments:

Option over Stadium site exercised at the last minute but what next?

With a day or so to go the Council at last makes up its mind and exercises the option over the Stadium site.

So what happens next?

1.  The E5 land is released from the option. So we can expect, I would suggest, another planning application for an alternative use in short order. Another supermarket? The race is on with numerous other applications already in for the west of Truro.

2. The Blue Land will be transferred to the Council before the 101st dwelling is occupied on INOX's original site (for 1500 houses).  Perhaps INOX will estimate when that might be? At that stage the Council also get the money to lay out the Blue Land as playing fields.

3. If within 5 years of  the date of the transfer the Blue Land is not laid out as playing fields it has to be transferred back to INOX and partners for £1.

All other possibilities are entirely in the control of INOX and partners. Access to the Blue Land could be a bit of an issue as it is an island site. But perhaps the Council can break through from the park and ride.

And INOX are talking about putting in another planning application for West Langarth.........


Posted by Fiona Ferguson at 19:48 No comments:


The money that Cornwall Council did not apply for to help with the abolition of the spare room subsidy in social housing.  What a pity

https://www.gov.uk/government/uploads/system/uploads/attachment_data/file/295291/s3-2014.pdf
Posted by Fiona Ferguson at 10:59 No comments:

Stadium; the silence of secrecy

I have still not heard what the Council's decision is on the exercise of the land option at Langarth but I have been given a paper with advice by officers to Cabinet members, Hannaford, Folkes  and Paynter. An extract is below.  What it says is clear. 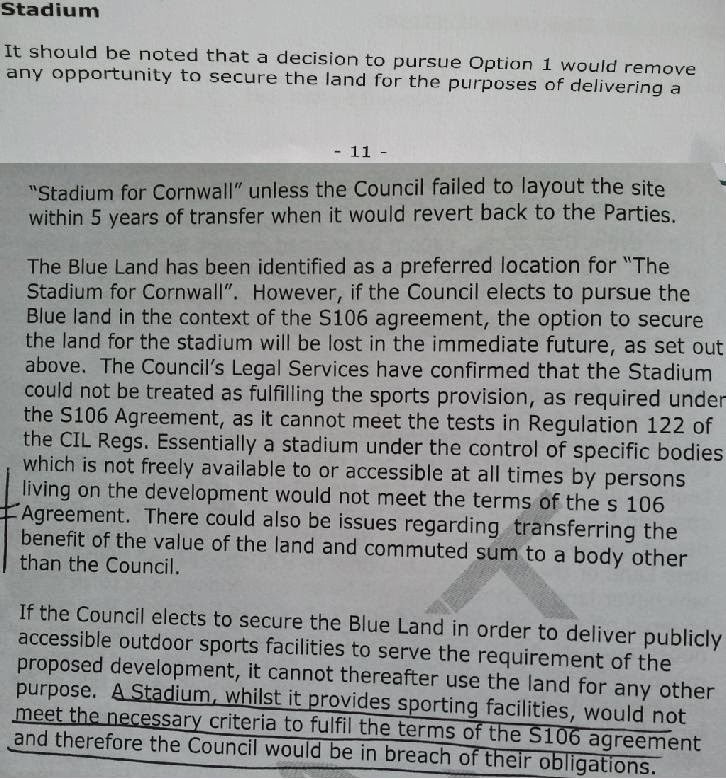 I have challenged officers as to whether it is really true that use of the Blue Land for a stadium would put the Council in breach of the Section 106 Agreement.

The whole rationale for that land was as a stadium site. Officers say that it has always been clear that the Blue Land could not be used for a stadium under the Section 106.  I am surprised they think so because that was the only way the land could be secured for a stadium.

Presumably the same advice will be given on any application for a stadium at Fraddon or for financial support for a stadium from development at West Langarth.   If so, it would be better to say so in order to avoid misunderstandings  from the beginning.

This is an issue of immense public interest and we are entitled to demand that the secrecy which surrounds it comes to an end.

Posted by Fiona Ferguson at 00:01 No comments: