Irrationality of the LOBOs: Open letter to the Council's Auditors, Grant Thornton

In your consideration of the 'irrationality' argument (raised by an objector to the accounts of the Council and the legality of the LOBO loans) I would be obliged if you would consider these factors:

1. As Cornwall Council has only a very short period to 'agree' a replacement interest rate with a LOBO bank counterparty its only practical option may be to repay the loan early.  It now acknowledges that it may need to hold £60m to £100m in short term deposits (which currently pay almost no interest) against the possibility of that eventuality.  As borrowings are made to finance capital expenditure that does not seem rational.

2. I have never seen a schedule of all the call option dates to judge what the exposure at any time is to LOBO bank calls. The schedule published shows the next option date for each loan but not the totality of the impact of option dates over the years concerned. So councillors have no precise knowledge about whether the 'perfect storm' referred to in the Council's Annual Treasury Management Strategy  (Council minutes 21 February 2016) may be avoided and whether the 'float' of £60m to £100m is sufficient.

3. Fundamentally, the  Council believes that it is not really exposed as a result of the banks' options as, provided it holds enough money in short term deposits, it can simply refinance elsewhere.

However, it is likely that the banks would only exercise their option when market rates rise above the rate payable on these loans.

The real risk is that the banks would opt to revise the rate at a time when market interest rates rose. Of course, the Council could then repay early but when it refinanced elsewhere it would pay the new market rate anyway.

Further, the ability to periodically increase the interest rate by the banks is a ratchet: It never comes back down even if market rates later drop.

So, overall for a reduction in the introductory rate on the loans for a short period of varying length, the Council agreed to borrow from the banks on terms such that the interest rate can never reduce but can rise without limit. And the Council compares this (favourably) with PWLB or other fixed rates which cannot go down or up? It then locks itself into this arrangement for up to 60 years?

It looks irrational to me. Even now councillors do not understand how astonishingly unwise these deals were.

Posted by Fiona Ferguson at 17:33 No comments:

Another Empty Promise from the Council?

Cornwall Council is conducting a survey on what you think of its proposed new Customer Promise.

I have not noticed publicity about this consultation until yesterday and the closing date is 12th May.   This is too short a period, especially over this election period when councillors are changing.

1. Is the promise now so vague as to be meaningless- all the promises about the Council responding to letters in 10 working days/answering the phone within 20 seconds, providing value for money etc have gone.

2. The survey asks lots of questions about sexual orientation that seem unnecessarily intrusive.

3. This is billed as a Promise. So I suggest that the Council cuts out all the bits about what the Council expects from the public. It looks more of a bargain and the Council is the only side with sanctions.

4. Is the Council going to translate its messages into Cornish? Google translator covers most languages but not Cornish.  The Cornish language is being promoted by the LibDem/Indy Council. Indeed I understood there was a move for it to answer the phone in Cornish.


Or Cornwall Council could just make this promise;

"We will act professionally, do our best and if you are nice to us we will be nice to you."

I don't think it says anything else?

But  please complete the survey! 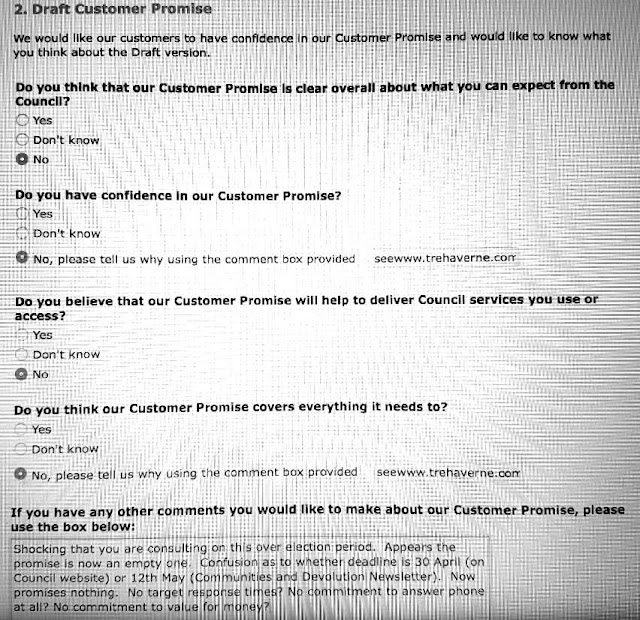 Posted by Fiona Ferguson at 23:25 No comments:

Signs of the Times - Chaos Ahead

There are parts of the country where local authorities are looking at reducing the number of road signs in the interest of road safety. The argument is that there is so much information that it becomes a distraction and therefore more of a danger and a hindrance to safe progress on the highway.

And we should be careful to protect those who work on the highways - no-one would argue against that. A recent accident involving a Cormac worker on the A390 should be reminder enough that this is a serious business.

But…. The 'No Money' Council has just spent £172k  on  massive new digital traffic signs in Truro. Are they really necessary? And are they really effective? 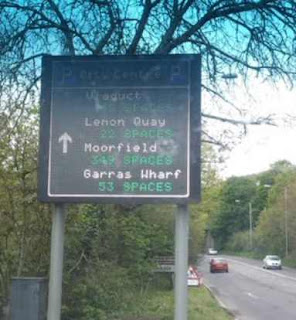 The recent chaos on the A390 reduced traffic to a standstill and everyone had plenty of times to read all the signs but at normal road speeds are there just too many for normal beings to take in?

With no consultation or planning (or did I miss that?) Cormac have installed £172,000 worth of flashing signs.  To what purpose? If there is a log jam we don't have many options for alternative routes.  If you are local you know what car parks will likely have space.  If you are not local, you have no idea where these car parks are and no time to read the sign as you go by.

Next thing, the Council will employ a communications expert to write messages for them and monitor feedback. Of course, the new employee would need to do graphics as the signs have that feature too. At least we won't be able to dismiss with “scant regard” the Council's “achievements” because they will flash these signs at us wherever we are.

Why not ask people to tune into Radio Cornwall and get a proper message?


Posted by Fiona Ferguson at 10:31 No comments:

This is a copy of the email I have written to senior officers at Cornwall Council:

I attended a very disturbing meeting of the Audit Committee on Friday.

The good news is that the measure I fought for in the last Council of having independent members on the Audit committee who actually know something about audit (not just councillors doing their best) is bearing fruit.

The last item on the agenda related to the appointment of external auditors.  I was astonished to hear an independent member of the Committee say that the Committee was being asked to make a decision about how to appoint its auditors after the official deadline for one of the two methods (the national method through Public Sector Audit Appointments Ltd (PSAA)) had passed (although we might still get under the wire).

I also heard from an independent member that 99% of similar bodies use the PSAA method.  This seems correct as if one looks on the PSAA website only 11 bodies are using the other route.  Two of these are Cornwall Council and the Council of the Isles of Scilly.  Indeed, from this it appears that the decision has already been made.  Cornwall Council is listed as having made the decision to go the other route.

The paper for members (which omitted to explain any of this relevant information) said that the benefit of us doing our own procurement is that we could 'keep it local'.

This would be great.  However, the fundamental point with auditors is to ensure that the Council’s relationship is not too ‘cosy' with them.  Further, they should not only be independent but be seen to be so.

When I asked which firms would meet all the criteria set by the Council about locality working and have the skills for the job, it became apparent that it would only be Grant Thornton.  Other national firms would have the qualifications but they would need to fund a local office.

It was the view of the independent members of the Committee that the work of auditing Cornwall Council, RCHT, Council of Isles of Scilly and related Council companies was unlikely to justify an office.

I have no reason to doubt the integrity of Grant Thornton but clear and transparent processes are very important.

In this connection, my reason for attending the Audit Committee was that I understood there would be an update on the National Audit Office investigation into the Council’s LOBO debt. There was. Grant Thornton said that the investigation was ongoing and was unlikely to be resolved before August (so nearly a year).

This has arisen out of objections to the Council’s accounts about debt inherited from the old Lib Dem led County Council.  The objector is, I understand, seeking to establish as to whether the LOBOs (particularly the ‘inverse floaters’, described by the auditors as ‘unique to Cornwall’ - not in a good way)  are ‘irrational’ and possibly illegal.  They certainly appear to be irrational. This was a case of heads the banks win and tails, Cornwall loses.

In a spirit of independence and transparency I would be obliged if the finance dept or the auditors would send me copies of the objections.  Cornwall Council should be campaigning to get out of these loans.  It should not be covering them up.

This is head in your hands stuff.

I look forward to hearing from you.

I campaigned for Remain. The Lib Dem/Indy Council sat on the fence but now worries Cornwall may receive less funding.

In any event, for the Council to enter this competition now, to promote 'ever closer union', is incompetent or treats the Referendum result with contempt or both.

Even Lord Ashdown, President of the European Movement was concerned.


Posted by Fiona Ferguson at 10:44 No comments:

Lord Teverson: Should Councillors only be paid allowance if they attend meetings?

The Lib Dems are running a campaign against the poor attendance record of a sitting independent Cornwall councillor. They certainly have a point.

It is an interesting question as to whether councillors should be paid an allowance only if they turn up to meetings.

Certainly this Council has many pointless meetings and many meetings go on far too long.  With the officer time involved this wastes substantial sums of public money but the Council does not count the cost of officer time unless a member wants a traffic improvement scheme. The number and length of meetings also makes it difficult for councillors who need to make ends meet by doing other jobs.

The Indy/Lib Dem administration arranged over 50 meetings/events/'workshops' in the last year to debate governance and how many councillors there should be in 2021. They consider that very worthwhile.

Anyway, to consider the question,  if we take Lord Teverson, who is standing for the Lib Dems in St Mewan:

Previously when he was a Cornwall Councillor he was a poor attendee. In his last year as a councillor (2012/2013) he  attended only 7 out of 18 meetings of the Council/its committees at which he was expected. An attendance rate of 39%. But he claimed his full allowances of £12,128.


Posted by Fiona Ferguson at 10:50 No comments:

'No money' Council spends close to £250k on communication 'experts'

The Lib Dem/ Indy Council think the problem they have is that people in Cornwall have 'scant regard' for their achievements.

They hope this will be fixed by taking on communication experts and by finding a way of making councillors less critical of the Council. They are to be required to show 'respect' for the Council.

Add 20% for their pension contributions


Posted by Fiona Ferguson at 12:11 No comments:


Posted by Fiona Ferguson at 21:38 No comments: