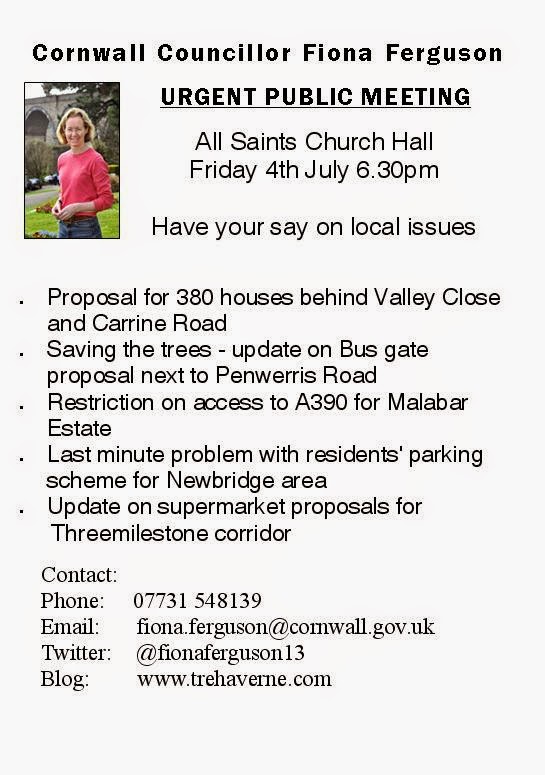 Posted by Fiona Ferguson at 22:01 No comments:

In April the Partnership Portfolio Advisory Committee looked at the business plans of all the Council's subsidiaries. The material presented for Cormac was just about sufficient for members to understand that Cormac was mainly to do with roads.

Cormac do a lot of good work and take a long term view. We all know that some of their work during the winter was excellent. But we do use taxpayers money to pay them and councillors should hold them to account.

I asked for a proper business plan (after all the relevant year had already started). I have continued to ask, including at the recent Scrutiny Management Committee on 29th May. There, in response to a question I raised about developers feeling they were overcharged by Cormac, I was told that it was only one developer who was being difficult. But then I was told that there was to be a workshop for developers on this very subject on 23rd June.

If it is just one contractor being "difficult" why the cost of a conference?

Posted by Fiona Ferguson at 15:59 No comments:

As I anticipated, the Council's approach to the abolition of the spare room subsidy has got nowhere.

The Government pointed out that the discretionary housing benefit allocated to Cornwall to help protect the vulnerable was actually underspent by £230,000. 86 councils applied for even more money and 85 of them got it.

The Council also made no bid for funds to build suitable smaller size social housing under the Government's £3.2 billion homes programme.

This is one ocassion where the Council should have spent less time campaigning and more time making the best use of the resources that were available. 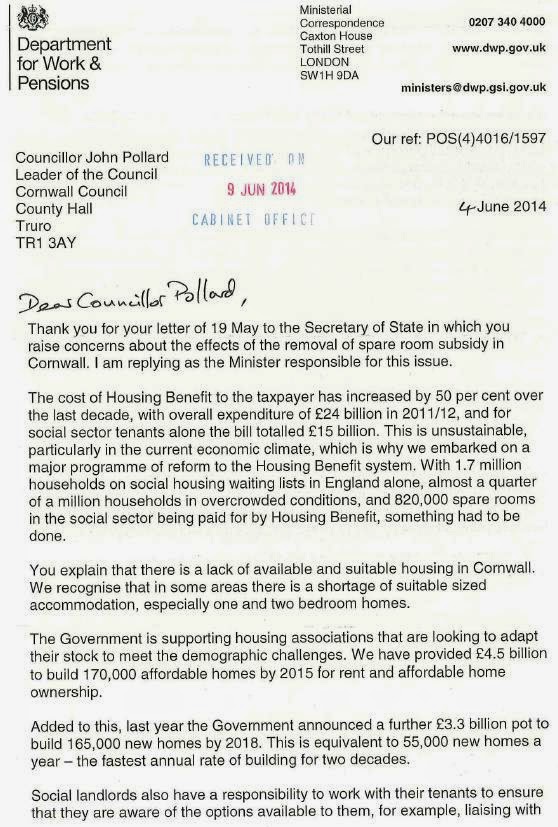 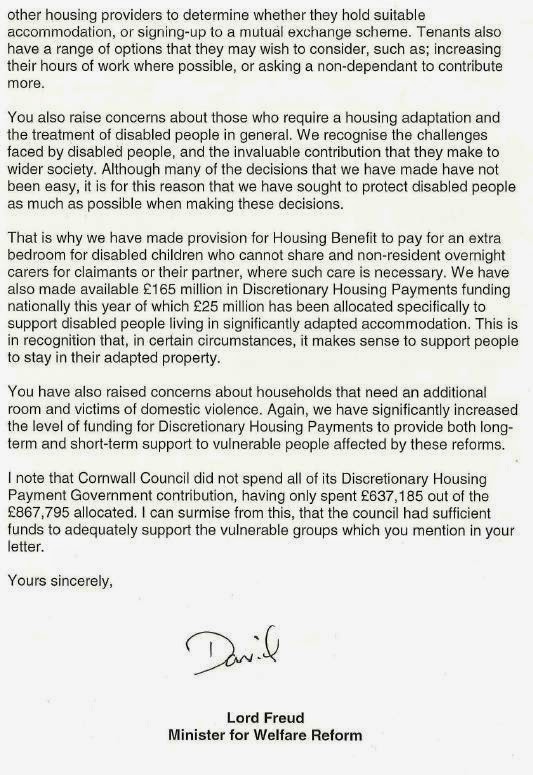 Posted by Fiona Ferguson at 22:26 No comments:

All Change at the Change Team

The Council recently advertised for a 'change manager' at around £40,000 a year.

At the last Council meeting my colleague, Cllr Stoneman, asked how many members of staff were in the Council's Change Management Team. He was told four 'permanent' staff.

So I was surprised to find that the budget for this team is £1.2 million a year. It turns out that there are also 20 temporary members of staff.

So the answer to Cllr Stoneman was a bit less transparent than one might have been expected.
Posted by Fiona Ferguson at 19:25 No comments:

I attended a meeting this morning of the Reputation and Performance Portfolio Advisory Committee.

On the one hand the Council tells everybody that will listen that there are massive savings to be made and the sooner they are made the less severe they will be. However, if true, its process of dealing with that challenge is incredibly ponderous and will cost Cornwall dear.

So far members have had the opportunity of participating in one of nine pre meetings on the Council's Strategy. Then we all came in to hear the results of all that. Now we are having ten meetings to give us the opportunity of asking for more information on different aspects of the budget for different service areas and so it goes on......

I wonder whether the Council's reputation will be enhanced by this process.

Posted by Fiona Ferguson at 19:22 No comments:

Jobs for the boys?

Cllr Mike Eathorne Gibbons was elected to the council as a Conservative and promptly joined the administration as an independent. He has been duly rewarded by his new LibDem/Independent masters.

Block voting by his new friends ensured that he was appointed to the Health Scrutiny Committee and immediately elected to the chair by prearranged block voting.

His appointment follows the sudden departure of portfolio holder Cllr Judith Haycock just prior to the announcement of the massive overspend of £11.6m and the subsequent reshuffle. The vastly more experienced Scrutiny Chair and Health professional Sue Nicholas lost out to political back scratching.

Whatever the politics I certainly wish him well in this very important post.

This week I was beaten by a similar block vote of the administration for Lib Dem, Rob Rotchell, to chair the Finance Portfolio Advisory Committee which advises Alex Folkes.

I was not at all surprised to see Cllr Folkes go for the comfy option of a fellow Lib Dem from North Cornwall. I was, however, astonished to find that Cllr Rotchell had been a member of the committee for a whole year. I have never heard him speak until today so we will have to wait and see if he is ready to offer critical challenge to Cllr Folkes or not.

Posted by Fiona Ferguson at 09:40 No comments:

Another day, another survey

Cornwall Council wants to know what you think ( it is writing to a random sample of 3000 Cornish households to ask them).

1. Will it be credible for the Council to make decisions based on those who respond out of 3000?  (Last time this was done in 2009 the Council wrote to about 18,000 households).

2. As the questions do not strictly conform to the Local Government Association criteria, will the Council be able to compare its performance to those of other authorities. When it was surveyed in the last year of the old County Council its results for residents' satisfaction, value for money etc were poor by comparison.

3. Many questions seem a little bit pointless. If 1,000 respondents say one of their priorities is shopping facilities is that a mandate to give permission for more out of town shopping centres?

4. This may 'only' cost £8,000 to the external company (Marketing Means) but there will be many hours of work for Council officers in assessing the results, disseminating them to members, arranging reputation workshops for members for members to consider them. These costs are just as real as the amount paid to Marketing Means.


5. Will we learn anything that we do not already know only too well?
Posted by Fiona Ferguson at 09:35 No comments:

Taking care of the money?

Can Cllr Folkes, Cabinet member for Finance, Resources and Communications, really expect the public to trust what he says about saving money unless he is transparent about the details?

He claims 'our aim is to try to save as much as possible from back office work' but his preferred option for a big new office in Bodmin was criticised by the Council's Chief Financial Officer as not being the best financial option.

His preferred option was estimated to result in lost savings to the Council of about £700,000 per annum. To put this in context, the plan to scrap the mobile library vans is designed to save only about £150,000 per annum.

Further, his plans to build a Council office in Bodmin do not reflect the proper debt costs. Can anyone afford to buy a house without counting the cost of the mortgage?

As we all know the Council has a massive overall debt of hundreds of millions. But the Council is using receipts from sales of its assets to build new Council offices while that debt remains unpaid and indeed may grow. If the Council thinks that is a good plan why not be transparent about it?

I am pleased to hear that Cllr Folkes has changed his mind and now thinks that the money spent by the last Council on offices in Truro and Camborne to make them work for hot desking was a good plan. I hope he will also tell Dan Rogerson MP, who wrote to his consitutents saying it was a waste. 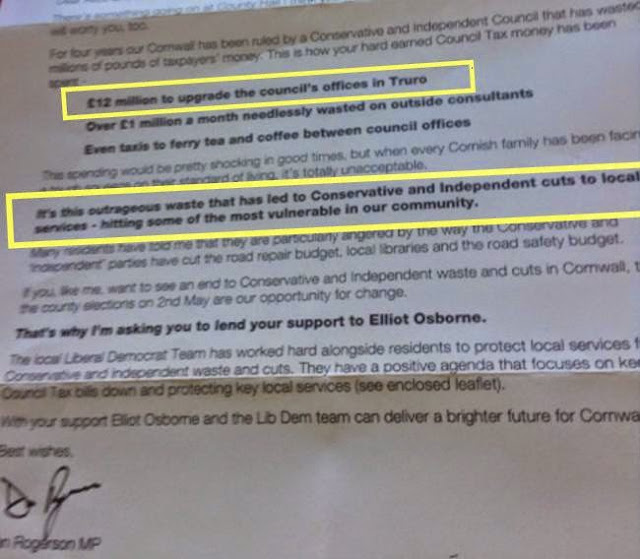 I note that Cllr Folkes does not comment on the ballooning overspend on adult social care due to poor management, on which he was recently taken to task by the Audit Committee.

Lack of transparency makes it hard to track the spend on consultants and agency staff. The big project of sorting out the Council's systems, so that all costs can be properly tracked and managed, has been completed and the BT deal is in place. Last week the portfolio holder said that one aspect of the BT deal had already saved the Council £8m.

The Council are now busy cancelling projects (such as £10m rebuild of C block at Helston School) so they certainly should not need many consultants.

If you are one of the lucky 3000 residents to receive the Council's survey you can tell them exactly what you think. However, if Cllr Folkes sails on despite the advice of the Chief Financial Officer what chance is there he will take note of others' views?
Posted by Fiona Ferguson at 08:24 No comments:

For the sake of clarity I am happy to restate the  Conservative Group position on a Cornish stadium.

On every occasion when it has been discussed the group have said that they supported a Stadium for Cornwall funded by the private sector.  The position of the group has not changed.   We have previously expressed concern about a shortage of public funds and subsequent events have shown that we were right to do so.
Posted by Fiona Ferguson at 11:47 2 comments: