Last night I attended a Budget Consultation in Newquay - one of a series of 23. There were 7 Cornwall Councillors (including the Leader), a good attendance from Newquay Town Council, three Council officers (including the Corporate Director for Environment) and about 6 valiant members of the public.

There were a number of empty seats 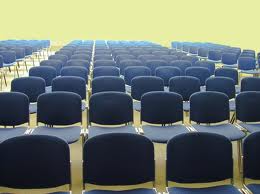 There were no suggestions as to which Council services might be cut - which was the fundamental question. But there was a suggestion that the number of councillors be cut.

Cllr Folkes said that members' allowances were a mere 0.4 per cent of the Budget. That is still over £2 million - so equal to more than half the total budget for leisure centres.

Of course, as someone remarked, our true cost is much higher when you consider all the meetings we have etc.. Personally, I think that it would be a good idea to start measuring those costs. Democracy is very important but cost is an issue, and we cannot control what we don’t measure.

Several expressed concern about staff (especially excess layers of management) and staff pensions. Cllr Folkes said that he was looking at it but not for this budget. Indeed, he suggested that, as the pension scheme was so expensive, one option would be to close it to new members. So cuts to services now but looking at staff later. That this is what the Secretary of State Eric Pickles refers to as a 'lazy choice'.

There was a feeling of lack of trust in the Council. Had it really done all it could to save money by efficiencies? I, for one, think that the Council could do better and that is where to start. A member of Newquay Town Council referred to two events held in Newquay this year which required a sign off from Cornwall Council. He said that 63 officers of the Council had to be invited to a meeting on these events.